Free Shipping for orders over $250

****PLEASE NOTE: THIS PRODUCT IS NOT COMPATIBLE WITH 'FTTN' NBN CONNECTIONS****

As the first ASUS N600 simultaneous dual-band Wi-Fi ADSL router, the DSL-N55U provides a stylish design, sophisticated features, and easy setup alongside supreme wireless and wired networking for the home.

Two USB 2.0 ports allow the DSL-N55U to share 3G/4G dongle signal; to share printing and scanning functions on a network, and operate as high-speed NAS (Network Attached Storage) when an external storage device is connected. It can act as a media server and home entertainment center. Any device, such as a PS3, iPhone, or Eee Pad can directly stream music and video wirelessly through the DSL-N55U.

For wired networking, four Gigabit Ethernet ports provide excellent capacity. Support for up to 300,000 data sessions means the DSL-N55U has around 20 times the networking capacity of other home routers. Data transmission stays fast even when the router is under heavy load, and easy-to-use QoS settings assure that important traffic — VoIP calls or online gaming — isn’t adversely affected by large file downloads.

Two Devices in One – ADSL Modem and Wi-Fi Router

Designed with the latest in networking technology, the DSL-N55U has two Independent CPUs for its ADSL modem and Wi-Fi router modes, which deliver exceptionally fast wired and wireless connectivity. It comes with a powerful detachable Wi-Fi antenna to further extend wireless range. Double your total wireless bandwidth and reduce Wi-Fi interference with the DSL-N55U’s simultaneous 2.4GHz and 5GHz bands at a combined speed of up to 600Mbps. Basic internet processes like web browsing or file downloads run under the 2.4GHz band, while simultaneous streaming of HD content occurs in the super-fast 5GHz band, always ensuring optimized speeds and allowing a smooth and buffer-free experience. 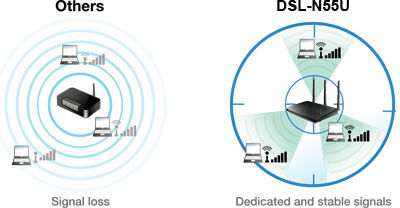 3-Step Easy Setup Through Your Pad, Smartphone, or PC

With the DSL-N55U, setup is simple. Simply power and connect the router and then open a browser on a Wi-Fi-enabled device like a laptop or tablet. You will be taken to a setup page with a prompt to enter the ID/password from your Internet provider and that’s it! Now setting up your network is easier than ever. 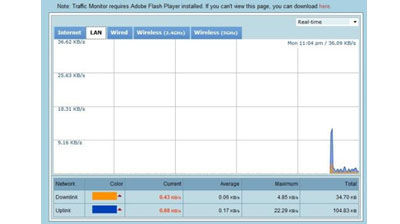 Optimize Your Network for You

Do you game a lot, or spend most of your time streaming videos? Whatever your planned use is, the DSL-N55U has a Quality of Service (QoS) that lets you select how much bandwidth is prioritized for virtually any task. Plus, the traffic monitor allows you to check your Web usage in a clear and graphical interface. 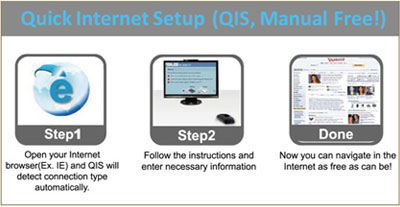 Featuring connectivity to devices, FTPs, Samba, UPnP AV servers, the DSL-N55U makes sharing and networking easier with two built-in USB ports. Download HTTP, FTP, and P2P files to a router-connected USB storage device all day, even without a PC. Additionally, the twin USB ports allow for networked printer and file server connections, so you perform multiple tasks at once.

Two Servers in One – Sharing Files and Streaming Videos Easily

DLNA lets you play multimedia files stored on router-attached USB storage through compatible devices such as PCs, tablets, PS3, Xbox 360, and smart TVs. In only three steps, you can easily set up an FTP server to share and access data — no matter where you are. 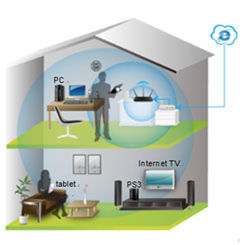 Powerful Online Multitasking at up to 300,000 Data Sessions

Support for a massive data pipeline of up to 300,000 data sessions means the DSL-N55U has around 20 times the networking capacity of conventional routers for exceptionally smooth performance.