IN STOCK (Dispatch 2-5 Days) - Items are in stock at our partner warehouse and will be dispatched within 2-5 business days. However, by the time our partner processes the order, there's a chance that the stock is no longer available, in which case we will notify you of an ETA. You may also call us to follow this up.

This is a router only - no modem is included

Orbi home WiFi System includes an Orbi WiFi Router and Satellite that delivers a stronger, faster WiFi signal throughout your home | Two Orbi cover up to 4,000 square feet with high-performance WiFi | Easy setup with a single and secure WiFi network, comes preconfigured out of the box | Enjoy seamless 4K video streaming and gaming without lag, buffering or dropped connections. 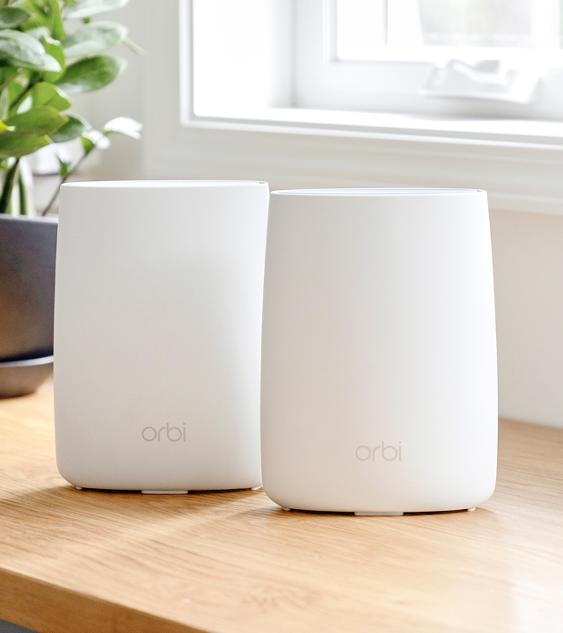 Meet Orbi – Fast, Secure, Whole Home WiFi
Orbi is the World’s First Tri-band WiFi System. From your front yard to your home office to your pool, Orbi gives you reliable, secure, and crazy fast WiFi to every inch of your home.

Finally, Mesh Done Right
Orbi can grow as you need it with seamless connectivity between devices and Orbi units. Orbi’s Tri-band WiFi System allows your devices to move between bands and other Orbi units without needing to reconnect. Every inch of your home will be covered in a blazing fast network giving you Better WiFi. Everywhere.

Is Orbi a Range Extender?
No! Range Extenders create multiple WiFi networks to expand your coverage. That means you need to reconnect based on where you are in your home. Orbi creates a single high speed network that gives your entire home complete coverage. Orbi dynamically optimizes your connections for you without having to reconnect.

Don’t Wait on Buffering
Buffering shouldn’t be a part of family movie night. Orbi helps prevent buffering and lag by creating a high speed Internet superhighway for all of your devices. The Orbi Tri-band WiFi System works with your current ISP’s modem to maximize the speed you are paying for.

Quick and Easy Setup
Unlike some WiFi systems, Orbi works with your Internet service provider right out of the box. You won’t need to change your current equipment to use the Orbi WiFi Home System. Orbi uses a single WiFi name (SSID) and with just a couple of clicks, your secure WiFi network will be ready in no time.

Routers. Not Just for Squares Anymore
Orbi’s sleek design and state-of-the-art technology steals the show. It gives your home a superior WiFi network that is both easy to setup and elegant to display.

Your New Bundle of Joy

WiFi You Can Rely On. Everywhere.
Take WiFi devices from room to room with seamless coverage.

Setup Like Never Before.
With simple setup from your mobile device, your secure WiFi network is ready in just minutes.